GOZOA´s World Lurra, is a very special world with unique rules. Physics plays a big role, but not as we are normally used to on Earth. The same applies to astronomy. Example, you can fall down from a very high place without getting injured. Even objects in the night sky can often feel and be very close. Like humans on Earth the lurrans is the dominat species on Lurra and live in different shapes and colors all over the world. But unlike the Earth, there are several species that can talk. There are pets similar to those we know, but the world Lurra also consist of more exotic animals that live all over the place.

Lurra has many types of civilization, such as the magnificent cities in the desert, gloomy castles in the dark forest, hot naval cities and a few odd individuals who live apart. There is a great difference in the various regions of Lurra. To the east is a country where it is always night. In this part of Lurra many shooting starts fall down and the strange animal named The Star Collector survives on these shooting stars. 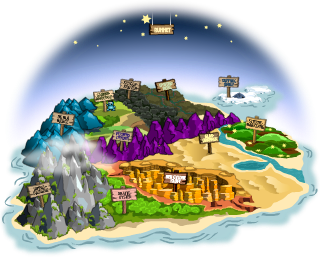 Here is the world Lurra where GOZOA travels around and solves different tasks.

GOZOA´s home is full of meadows, green forests and very different cities. GOZOA´s village is small and peaceful, and the people are very happy for what they have. But further north there is a much larger city. The inventor Asmoz has made many strange constructions, which help people from this city to live a much simpler life. 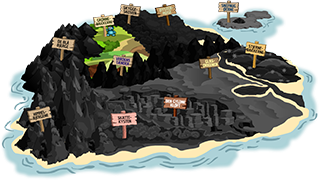 In the first 3 levels of GOZOA - Play & learn math, GOZOA runs and jumps through the Green Hills. There are plenty of entrances to fun and exciting math tasks GOZOA must solve before he can move on to the World´s Teeth!

The Green Hills also have an amazing shop where you can style GOZOA and his friends in the app GOZOA - Goes shopping.

East of GOZOA´s homeland is a dark and spooky forest. It is said that the forest is full of traps and it is almost impossible to find your way around. Therefore, is it more than 100 years ago someone went into the forest, and nobody knows what is hiding in there. 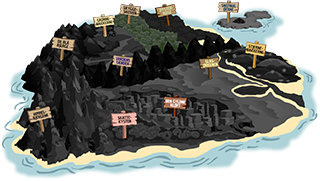 Behind the Shadow Forest is a gloomy country that can best be described as a large swamp. Once there were fields and cities, and near the big lake there was a magnificent castle, which was owned by a wealthy Baron. The Baron was very popular, and he loved to visit the small villages to greet the people. It is said that the Baron was so fond of his people that he once went to a witch, and asked her to remain the country forever. The wish was fulfilled, but not as the Baron had imagined. Legend has it that to this day the same people still live there but the country is no longer green and lush, and the people no longer love the Baron. 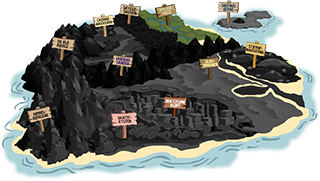 Far out in the ocean to the north is a large island covered in snow and ice. Only very few have ventured out on the long journey to reach the island and meet its inhabitants. Those who live on the island eats primarily fish and snowberries, but in the centre of the island is a magical cave where there is heat and light, and everything can grow. Once a year the inhabitants travel to the cave to pick fresh fruits. 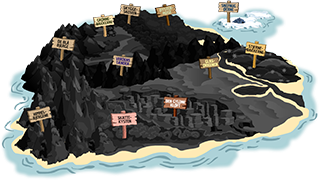 This mountain range provides a natural border between the Green Fields and the desert. There are many different tunnels through the mountains and deep down below them are old diamond mines. Between the World´s Teeth and the Sky Mountains is a huge well, which is said to be infinitely deep. The well is so old that on one knows what it was used for. 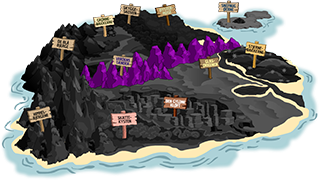 In level 4-6 of GOZOA - Play & learn math, you must help GOZOA through the World's Teeth, which is full of exciting challenges.

A mysterious country situated where the World´s Teeth descends into the sea. In the Star Hills it is always night, and the sky is always illuminated by the many shooting stars that falls down to the ground and the strange animal named The Star Collector survives on these shooting stars. 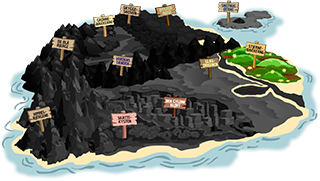 It is named the Glass Desert because it is sometimes so hot that the sand turns into glass. In the middle of the desert is a major city. The people who dug diamonds beneath the World´s Teeth built this city many centuries ago.

Close to the city, there is a large lake, which forms an oasis in the barren desert. The lake is located near the Starfall Hills, where the sun is never high enough in the sky to make the water evaporate, as it did in the rest of the desert a long time ago. 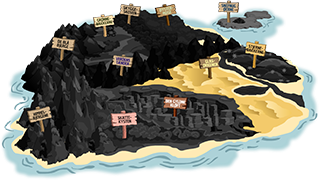 The last 3 levels of GOZOA - Play & learn math takes place in the Glass Desert, where GOZOA has to solve even more fun math tasks.

Once, long ago, the Glass Desert was not a desert, but instead a large lake. From here run a lot of small rivers into the sea and made deep cracks in the ground. Eventually the ground became so hot that all the water had evaporated, and what were once major rivers are now deep golden canyon. 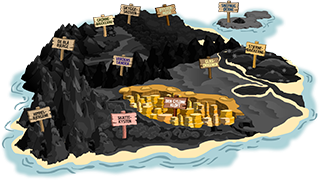 What was once the delta of the rivers is now a tropical forest. Where land meets the water is a long beach with many treasure hunters. Long ago there were many pirates in the seas, and rich people often hid their treasures deep beneath the sand because the soil was easy to dig in. Many of them never came back or forgot where they buried their fortunes, so now there are a lot of undiscovered treasures. There are still pirates in the oceans, waiting for the treasure hunters to find gold so they can steal it. It is said that pirates lives in caves at the foot of the Sky Mountains. 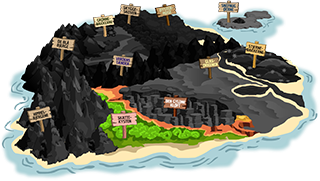 The highest mountains in the World Lurra are the Skyreach Mountains. They are so high that you can´t see the top of the mountains and clouds always cover it. At the border between the World´s Teeth and the Skyreach Mountains are the sole known way up, but it is so dangerous that only very few takes the trip. The mountains cover such a large area that no one really knows what is hidden in the middle of the mountain range, but the old tales talks about a climber who once reached a huge plateau where large giants lived in large caves, carved into the mountain. 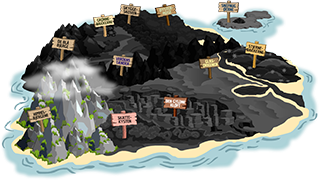 Tall cold mountains to the north. The Inventor Asmoz built his observatory in the Blue Mountains because it is almost always starry sky. With his giant telescope he can see all the other planets. When he is not studying space, he invents many strange machines and other things. GOZOA are very curious and love to come visit and try out his latest inventions. 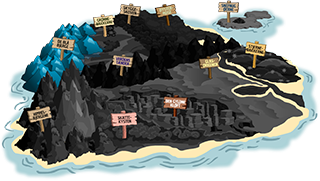 GOZOA has always wondered how other worlds look like. He often dream about travelling to distant stars and other unfamiliar planets and meet creatures he has never seen before. One day when GOZOA invited Inventor Asmoz in the Blue Mountains he saw a huge instrument he had never seen before. In his curiosity he got into it, and before he knew of it he went off to the stars. It was a space rocket!

When he finally learned how to control the space rocket, he was already far away from home, and Space is big and dark, so it´s hard to find back again. 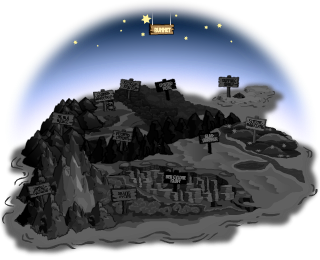 In GOZOA - In space explores the unfamiliar planets in Space as he chases gold coins and solves math tasks.